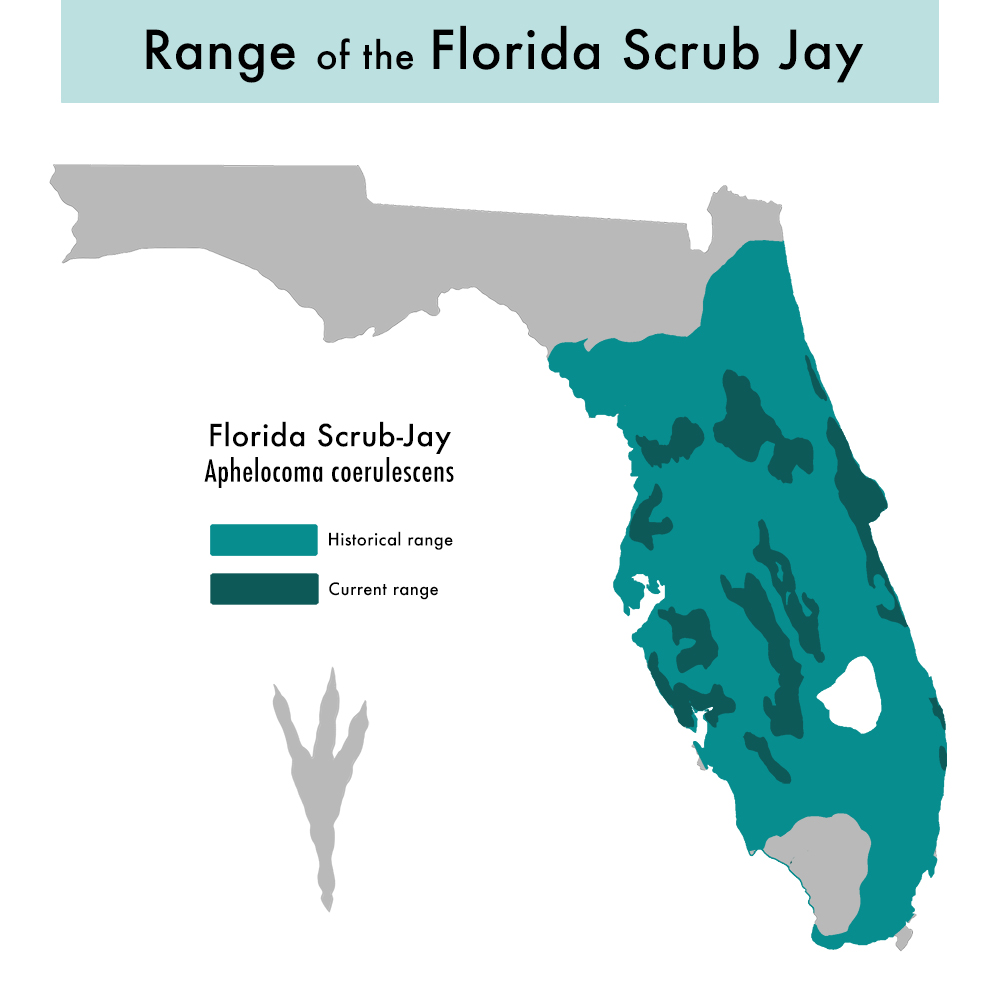 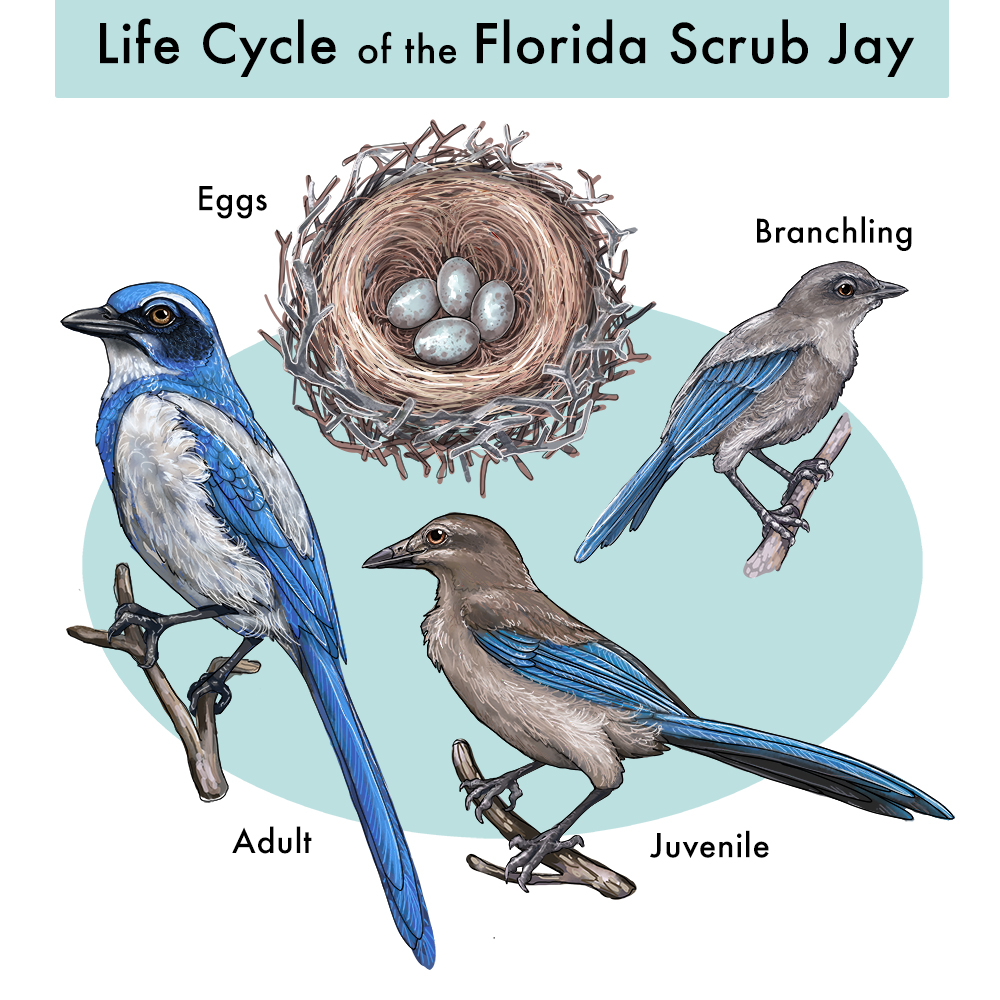 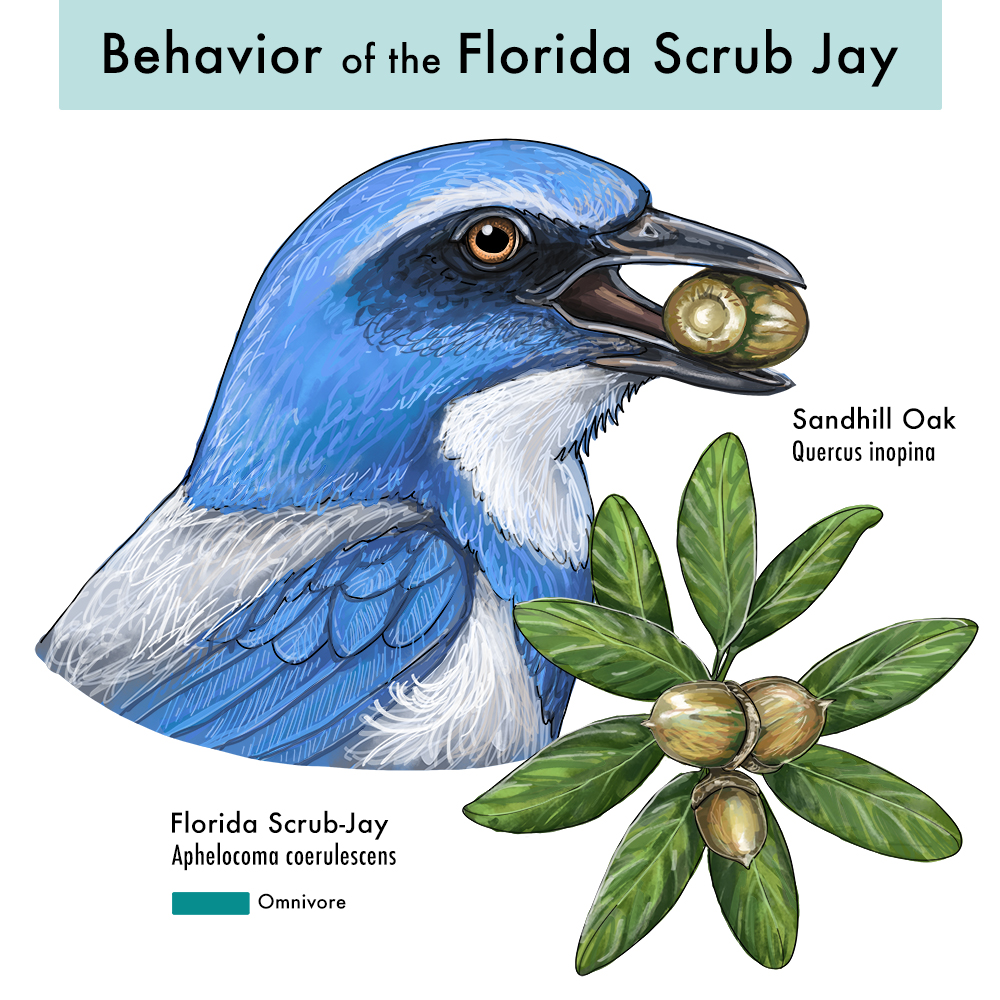 Florida Scrub-Jays are endemic to Florida, where they prefer well-drained, sandy soil ridges with Scrub oak habitat that experiences fire frequently. These habitat conditions exist in a very small range in Florida, concentrated to the scrub oak habitat along Florida’s Lake Wales Ridge and Ocala forest, as well as a handful of preserves along the Gulf and Atlantic Coast.

Scrub-jay pairs mate for life and breed from March to June, building sturdy nests from twigs and palmetto fibers. A female will typically lay between two and five eggs, and incubate them for 18 days. During this time, the male partner will feed her. After hatching, juveniles fledge between 12 and 25 days later. As sub-adults, young jays will remain in their family’s territory and help their parents raise siblings as a helper bird. Scrub-jays do not migrate and will defend the same nesting territory year after year, and in the wild, Scrub jays can live up to 15 years.

Florida Scrub jays are omnivores and spend a lot of time on the ground foraging. As chicks and juveniles, their diet consists of protein in the form of arthropods like caterpillars and spiders, or small vertebrates like toads and lizards. As they mature, their diet becomes more fibrous from their main food source; acorns.

Florida Scrub jays act as a habitat condition indicator species, meaning the success of this species, directly represents the success of other native species like the Indigo snake and Gopher Tortoise. Florida scrub habitat is endangered, so scientists use scrub jays as health indicators for the whole ecosystem, using their data from this one species to effectively create conservation measures that benefit up to 55 other species.

Unlike most bird species, Scrub jays are cooperative breeders, meaning sub-adults will stay with their parents to help raise siblings and gather food. This cooperation has been shown to dramatically improve the rate of successful nesting and juvenile survival. These young birds who stay home are called Helpers, and they perform a number of duties, including nest building, feeding siblings, guard duty, and foraging. When building the nest, males typically gather larger twigs and females will weave the nest with palmetto fibers.

In the fall and winter, jays eat only acorns harvested and cached in the sand from earlier in the year. One bird is able to bury between 6,500 to 8,000 acorns in a couple of months and then successfully locate about 80% of them. Like other Corvids, Scrub jays have a great spatial memory, which allows them to recognize patterns and landmarks as indicators of cache locations.

Jays are intelligent birds, working together in large family groups to raise multiple generations and protecting each other from predators. This is called cooperative breeding, and it means siblings will help parents raise younger generations until they're ready to find a home of their own.