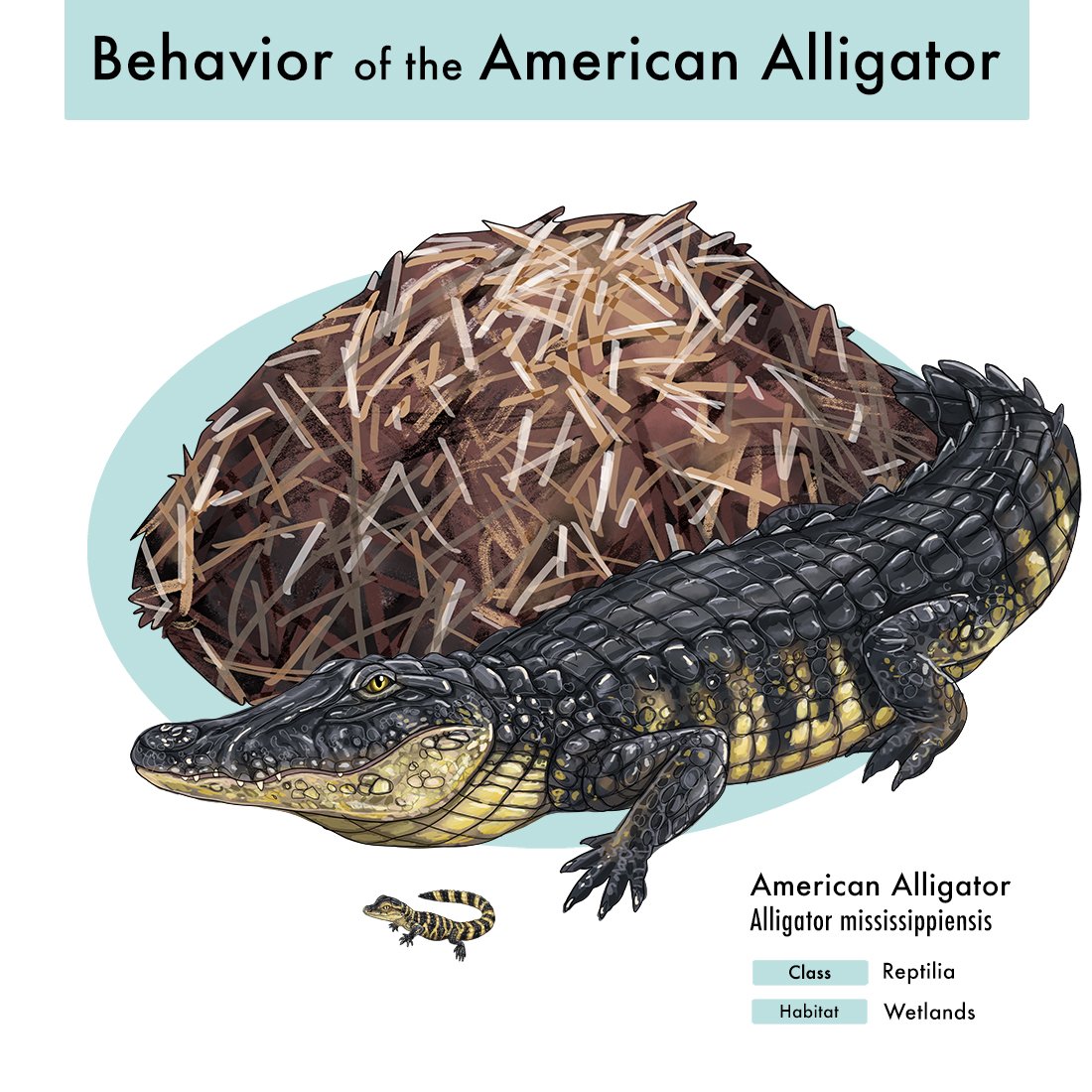 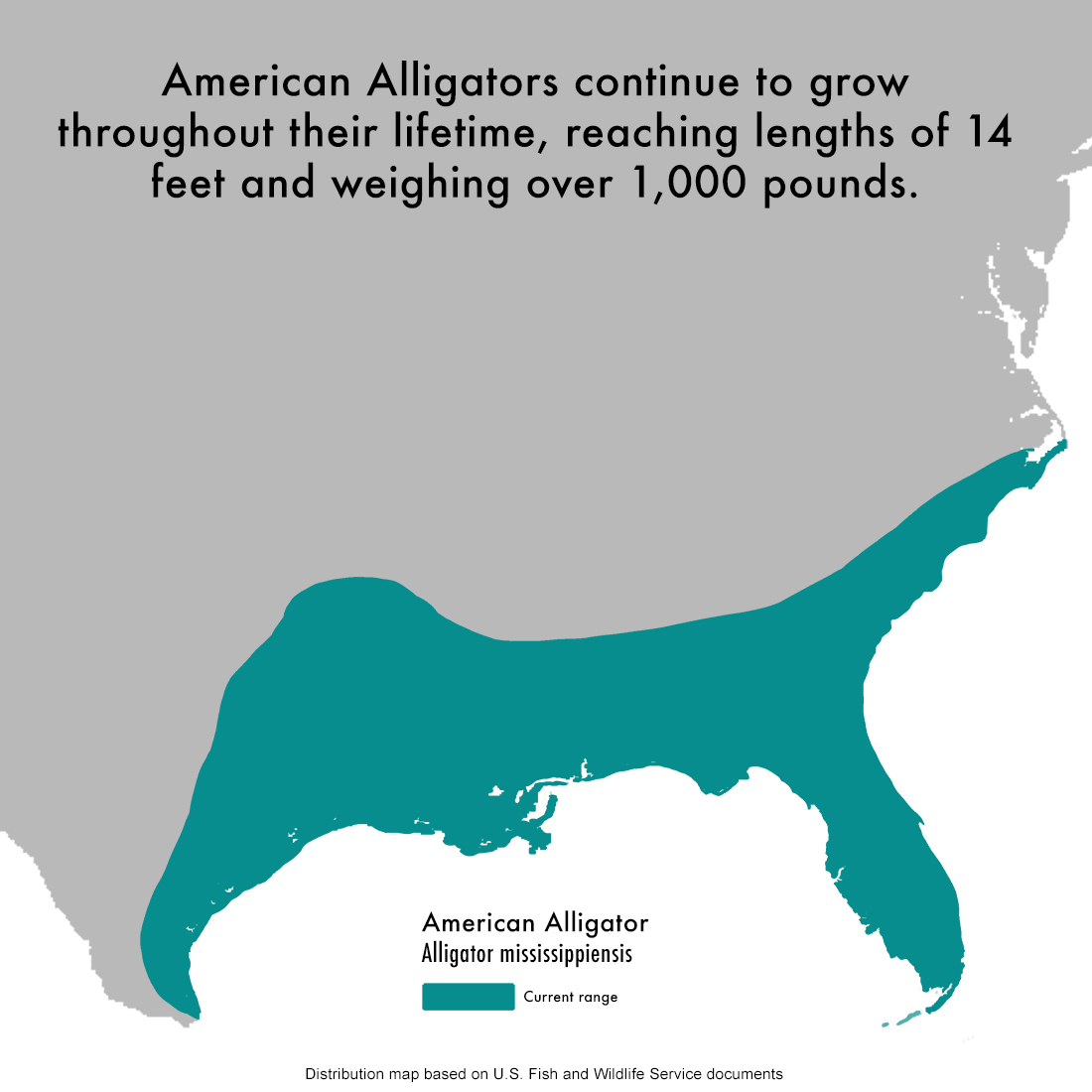 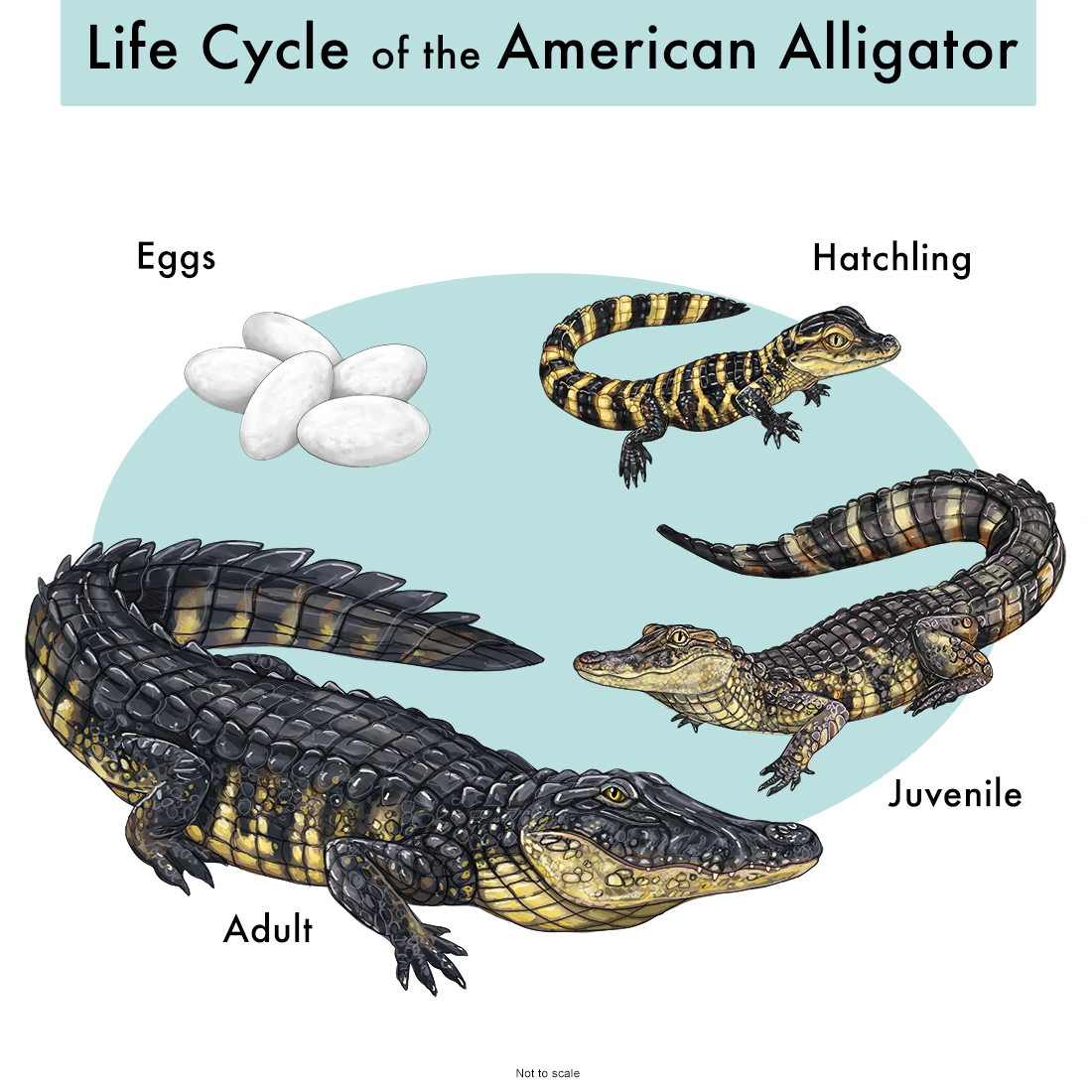 American Alligators are found throughout the Southeastern United States, with the largest populations in Louisiana, Alabama, Georgia, and Florida. Wetlands, rivers, and freshwater lakes are the cornerstone ecosystems for Alligators, and they are excellent stewards of their environment as a keystone species.

Alligator mating season is between March and May, with mothers nesting between May and July. Male Alligators, or Bulls, will perform deep vocalizations and a bobbing dance with their head held high in the air to impress females, called cows. The low frequency of the bull gators’ vocalization causes the water above his back to start rippling and “dancing”, which is what inspired the name of this mating behavior; the “Water Dance.” Once a female has mated she seeks out a territory to build a nest of vegetation, sometimes as wide as 10 feet and as high as 3 feet. She builds the nest above the waterline, so her eggs can incubate safely, and remains on guard duty throughout the incubation period. On average, between 32 to 46 eggs are laid, with incubation requiring approximately 63-68 days.

When hatching begins, the baby Alligators will call out to their mother with small squeaks, who then arrives at the nest to help uncover her brood of hatchlings. She will also gather the hatchlings in her mouth and take them to the water where there is cover and safety. A mother Alligator will stay with her brood for at least a few months and actively protect them from predators while they remain near her. Eventually, the hatchlings wander off or are chased away by the mother in preparation for her next brood.

Juveniles typically grow about 8 to 10 inches a year, with female growth tapering off around 9 feet, and males continuing to grow up to 14 feet. While Alligators continuously grow throughout their lifetime, it becomes very slow as they age thanks to a significant drop in metabolism.

American Alligators are top predators in the food chain, primarily feeding on fish, small mammals, wading birds, and occasionally large mammals like Deer, hog, and even other Alligators. As hatchlings they predominantly hunt insects, frogs, and minnows, and as they become a juvenile, they begin hunting small fish, snakes, and even young birds.

Alligators have a long and fascinating history. Both from the perspective of them being relatively unchanged for over 8 million years, but also in their relationship with the environment and humans.

When Alligators are young, they are vulnerable to large birds, raccoons, bass, and even other Alligators. They depend on their mother for protection in the first months of life as well as their barred, yellow and black pattern that helps them camouflage into the thick aquatic plants that make up their habitat.

The yellow banding fades away as the juvenile matures with the color of adult alligators varying from olive, brown, gray, or nearly black, with a creamy or yellow underside. Their habitat plays a key role in the adult coloration, with algae-laden waters producing greener hued skin, and tannic acid waters from overhanging trees producing darker hued skin.

Alligators are an important part of the wetlands ecosystem and are considered a keystone species wherever they are found. The nesting activity of female alligators is important for the creation of peat, or new ground that builds on itself to create land for trees and plants. Several turtle species, such as the Florida red-bellied turtle, us both active and old alligator nests to incubate their own eggs!

Alligators also construct their own pools, called Alligator holes, that hold water throughout the year. As the dry season approaches and water dries up from surrounding areas, the retained water in the gator hole becomes a refuge for a variety of wildlife. Although these animals become easy prey for alligators and other predators, the value of the refuge outweighs the risk until the cycle of rain returns.

This species also represents a compelling story about conservation. In the early 1900s, alligator hides were sought after for luxury leather products, with hunting parties killing hundreds of thousands of animals, nearly driving the Florida population to extinction. In 1967 under a law that preceded the Endangered Species Act of 1973, the American alligator was listed as an endangered species and gained protections from hunting and habitat loss. The number of alligators began to rebound soon after the pressures of hunting ended, with the population responding so well to conservation initiatives that it was removed from the list of endangered species in 1987!

According the National Park Service; Human conflicts with alligators are rare and generally not serious, but incidents do occur and have been reported. Education and awareness is the best long-term way to avoid future incidents. Most alligator attacks on humans are attributed to the illegal feeding of alligators, which makes them bolder, less wary of humans, and more likely to attack instead of flee. It is illegal to feed or provoke alligators as well as all other wildlife.

These ancient reptiles have been in North America for more than 8 million years and are a keystone species in all freshwater habitats in Florida. With their powerful tails and large bodies, they dig waterholes in the dry season and build mounds for nesting, which provide opportunities for new habitat growth.